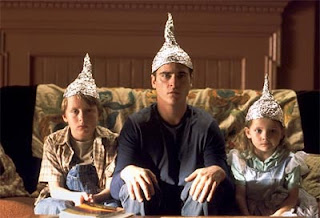 What can you say about Keith "I could fit my entire audience into a laundromat" Olbermann that hasn't already been said? He's goofy, off-base, off-kilter, off his meds and just plain...off. But he really goes around the bend this time:

Granted, these guys weren't the brightest bulbs in the chandelier. But this is the beauty of public awareness. Suppose the guy at the "Photomat" had been some bleeding-heart, ACLU-loving anti-American leftie, and had taken the position, "Well, it's just art. I hope he does well in his endeavors." Then there would have been an attack, and of course it would have been Bush's fault.

But, since these guys were captured, there just a bunch of "morons" (Olby's words). You can watch more of the sheer madness that is Keith "Even my mom doesn't watch my stupid show" Olbermann over at The Olbermann Channel at YouTube, a spin-off of Olbermann Watch. (Oh, by the way, don't tell anybody that four of these guys were in this country...ILLEGALLY!!)
Posted by Unknown at 5/10/2007 11:45:00 AM