The death of the Scamnesty bill

OK, so it happened last week. My wife and I were in the middle of moving, and I had to wait until the weekend for Comcast to hook up my internet.

We cannot forget how the schlubs in Washington tried to ruin and bankrupt this country by adding 12-20 million new welfare cases to the roll. We cannot forget how many RINO's in the Senate, trying to cozy up to their favorite bartender (Ted Kennedy), almost gave away the southwest United States to the LaRaza crowd. The defeat of this bill was brought about by pressure from us right-wing bloggers, and from talk radio. Gribbit has an analysis at his own website:

What did Talk Radio and Bloggers learn from the battle to kill the bill?

We learned that when back door deals are being hustled through Congress, the American people need to know as-soon-as-possible and we are the ones who must keep up the fight. America has political ADHD and those in Congress who propose these back door deals rely on that.
[...]
We learned that talk radio and the conservative blogosphere work well together. Bloggers are passionate people. We can recognize dangerous aspects of pending legislation then pick it apart. Talk radio has the power of its audience. When a talk radio show host can grab hold of the research done by the conservative blogosphere and take that information to his/her audience, wondrous democratic forces take hold. The people are empowered. It makes them think. It makes them read. Most of all it makes them want to talk about what they like about what’s going on. But more importantly it makes them talk about what they don’t like about what’s going on. And that’s what happened with the death of Bush-McKennedy.

So, what do the Defeatocrats Democrats want to do to make sure their kingodm isn't threatened again? They want to impose their will onto the people by reviving that steaming pile of horse...uh, you know...called the "Fairness Doctrine." This is an illustration of the "Fairness" Doctrine: 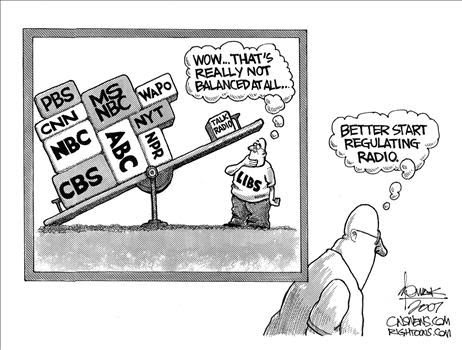 What that means is that in a given medium (say, talk radio), there has to be a "balance" between opposing viewpoints. In other words, if I own a radio station, and I broadcast Rush Limbaugh betwee noon and 3, then Hannity from 3 to 6, I have to give equal time to a bunch of left-wing loonies like Al Franken or Randi Rhodes for 6 hours. But hey, as long as we're regulating talk radio, let's do what John Bambenek (at Stop the ACLU) suggests:

As a compromise measure, if we are going to enact a "fairness doctrine" for the radio waves, we should do so also for television. Let's have fairness on NBC, ABC and CBS which are also transmitted over the air. Let's have fairness on the movies shown on those channels so that they fairly represent all viewpoints instead of the latent left-wing propaganda that animates Hollywood. Let's have fairness in the various sitcoms that all portray fast and loose morals. We could have real family-friendly entertainment again.

We could also apply the fairness doctrine to the Internet to balance left-wing biases outlets such as Wikipedia and the Daily Kos. Let's apply the fairness doctrine to colleges and the classroom where indoctrination is most prevalent (and most left-wing). The possibilities are endless and the lawyers could be well-employed. Let's empower the Family Research Council to litigate fairness on all our media outlets.