And they wonder why nobody watches CBS News anymore

Boortz can tell ya. And he does here. Let me make one thing clear: I think what our troops are doing in Iraq is the right thing. That said, sometimes, the heat of the battle and on-edge nerves can cause a soldier to do something he wouldn't normally do. (Right, John Kerry?) So I am not here to declare this soldier's guilt or innocence.

What I am here to say is that this high-falootin' schlub of a "journalist" ought to get his head out of the clouds, walk a mile in these soldiers' combat boots, find out what it's like to be shot at with no idea where the fire is coming from, and then let's see if he has the Malkins to take this same kind of attitude he took in interviewing this kid that was in the middle of his FIRST combat mission in Iraq: 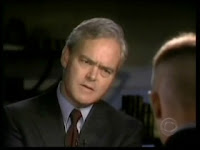