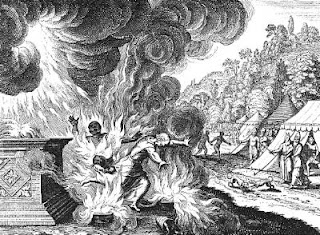 Leviticus 10:12-20—12 And Moses spoke to Aaron, and to Eleazar and Ithamar, his sons who were left: "Take the grain offering that remains of the offerings made by fire to the LORD, and eat it without leaven beside the altar; for it is most holy. 13 You shall eat it in a holy place, because it is your due and your sons' due, of the sacrifices made by fire to the LORD; for so I have been commanded. 14 The breast of the wave offering and the thigh of the heave offering you shall eat in a clean place, you, your sons, and your daughters with you; for they are your due and your sons' due, which are given from the sacrifices of peace offerings of the children of Israel. 15 The thigh of the heave offering and the breast of the wave offering they shall bring with the offerings of fat made by fire, to offer as a wave offering before the LORD. And it shall be yours and your sons' with you, by a statute forever, as the LORD has commanded." 16 Then Moses made careful inquiry about the goat of the sin offering, and there it was—burned up. And he was angry with Eleazar and Ithamar, the sons of Aaron who were left, saying, "17 Why have you not eaten the sin offering in a holy place, since it is most holy, and God has given it to you to bear the guilt of the congregation, to make atonement for them before the LORD? 18 See! Its blood was not brought inside the holy place; indeed you should have eaten it in a holy place, as I commanded." 19 And Aaron said to Moses, "Look, this day they have offered their sin offering and their burnt offering before the LORD, and such things have befallen me! If I had eaten the sin offering today, would it have been accepted in the sight of the LORD?" 20 So when Moses heard that, he was content.

The circumstances of the deaths of his two sons notwithstanding, the eating of the Grain Offerings and Sin Offerings and Peace Offerings must still be finished. The goat of this particular Sin Offering was to be eaten by Aaron and his sons. However, Aaron says, in short, that his two sons—Nadab and Abihu—had become their own Sin Offerings. They had offered up sacrifices, and had still been slain by God because of their transgression, with no way to expiate their sin. So Aaron says, “If we had eaten that goat, would that have brought my sons back? Would they not still be dead?” And this is a point that we need to make before I close. What Aaron is saying is, basically, “Is there a chance at atonement after one has died?” And the answer to that is, of course, “no.” Even if Aaron and his remaining sons had eaten the Sin Offering, that would not change the fact that Nadab and Abihu were dead. There is no offering that the living can make on behalf of the dead. Which is why the Roman Catholic idea of Purgatory is such a blatant fallacy. They teach their followers that by doing “good works” and giving indulgences, they can make atonement for the dead so that the dead don’t have to spend so many days in Purgatory.

They base this belief on a passage from 2nd Maccabees 12:43-46—43 And making a gathering, he sent twelve thousand drachms of silver to Jerusalem for sacrifice to be offered for the sins of the dead, thinking well and religiously concerning the resurrection. 44 (For if he had not hoped that they that were slain should rise again, it would have seemed superfluous and vain to pray for the dead), 45 and because he considered that they who had fallen asleep with godliness, had great grace laid up for them. 46 It is therefore a holy and wholesome thought to pray for the dead, that they may be loosed from sins. This the Roman Catholic Church declares to be canonical, binding on all the body of Christ, and to be held in the same regard as the inspired (God-breathed) words of Paul, Moses, Matthew, Daniel, etc.

However, one of the Romans Catholic’s greatest heroes, Jerome, when compiling the Latin Vulgate, said the following of the deuterocanonical books:
"As, then, the Church reads Judith, Tobit, and the books of Maccabees, but does not admit them among the canonical Scriptures, so let it also read these two Volumes (Wisdom of Solomon and Ecclesiasticus) for the edification of the people, not to give authority to doctrines of the Church" (Commentary on Wisdom of Solomon and Ecclesiasticus).

And in his Preface to the Books of the Vulgate Version of the Old Testament, "The Book of Daniel" he writes,
"I say this to show you how hard it is to master the book of Daniel, which in Hebrew contains neither the history of Susanna, nor the hymn of the three youths, nor the fables of Bel and the Dragon; because, however, they are to be found everywhere, we have formed them into an appendix, prefixing to them an obelus [a mark to denote a questionable passage], and thus making an end of them, so as not to seem to the uninformed to have cut off a large portion of the volume."

So even Jerome did not include the Apocryphal books as part of the standard to which the church was to hold. Could they be used for edification? Yes. For authoritative teaching? No. Therefore, the whole notion of Purgatory and indulgences falls on its face, being built upon a faulty foundation.

Another possibility as to the reason for Aaron and his sons not eating the goat of the Sin Offering is this: They may have perhaps felt that, being men with sinful hearts as their two dead brethren, they did not deserve to partake of such a holy feast. After all, God said of the Sin Offering, Leviticus 6:29—“It is most holy.” Besides, they were not so very far removed from their own transgression at the foot of Mt. Sinai, when Aaron himself brought sin upon the people while Moses was receiving the Law. And as the sons of Levi went through and slaughtered those who cleaved to the golden calf, now God Himself destroyed two who had profaned the very commandments He had just previously imparted. No doubt Aaron felt the shame of his sin of idolatry anew as he witnessed the deaths of his own sons for rebelling against God, and felt too ashamed to partake in something that was “most holy” to YHVH.

In another Scripture, King David felt a similar undeservedness when he was in battle with the Philistines. Hearing their king express his intense thirst for water, three brave men broke through a wall and brought him water. David said, in so many words, “I don’t deserve for these men to risk their lives so that I may be comforted.” 2nd Samuel 23:14-17—14 David was then in the stronghold, and the garrison of the Philistines was then in Bethlehem. 15 And David said with longing, "Oh, that someone would give me a drink of the water from the well of Bethlehem, which is by the gate!" 16 So the three mighty men broke through the camp of the Philistines, drew water from the well of Bethlehem that was by the gate, and took it and brought it to David. Nevertheless he would not drink it, but poured it out to the LORD. 17 And he said, "Far be it from me, O LORD, that I should do this! Is this not the blood of the men who went in jeopardy of their lives?" How many times has this happened? We say, in the hearing of others, “Gee, it sure would be nice to…” Have some certain thing. God to some certain place. Go to a game when we know someone has tickets for that team. And somehow, some way, somebody we know hears that and goes out of their way to make that happen. And all the while, we’re trying to enjoy ourselves, but in the back of our mind we keep thinking, “They really shouldn’t have done this for me. This must have cost them a bunch.” And we try to enjoy ourselves, but we just can't.

That’s what David was thinking. He did not deserve to enjoy this gift that had been purchased by the blood of his three brave men, and could not bring himself to partake of it. He could not understand why men would risk their lives for a sinner like him. Especially when he had done nothing to deserve such a sacrifice on his behalf. Sound familiar? How often do we tell people that salvation is “by grace alone through faith alone in Christ alone”? And yet how often do we hear people say “That’s too easy. Christ could not forgive my sins—I have to add something to faith so I can deserve to be saved.” And yet that is so far from the truth—as if any one could ever deserve to be saved; as if we could make ourselves acceptable in God’s eyes. We can't—but God can. It is God who makes us accepted—in Christ. Ephesians 1:5-6 says that God the Father has 5 …predestined us to adoption as sons by Jesus Christ to Himself…6 to the praise of the glory of His grace, by which He made us accepted in the Beloved. He made us accepted—NOT we make ourselves acceptable. It is by the death and resurrection of our Lord Jesus Christ—not by works, lest any man should boast—that God forgives our sins, sets us in heavenly places, and justifies us in His sight. So let us not bemoan His death like it was some unforeseen tragedy, as Aaron did following the sudden deaths of his beloved sons. Let us not think, as King David, that it was something that we must refuse since we did nothing to deserve it. Because as those brave men poured out their lives for the king they loved, so Jesus poured out His blood for the sheep that He loved. And let us draw near with a true heart in full assurance of faith, having our hearts sprinkled from an evil conscience and our bodies washed with pure water. Let us hold fast the confession of our hope without wavering, for He who promised is faithful (Hebrews 10:22-23).
Posted by Unknown at 2/20/2013 09:00:00 AM