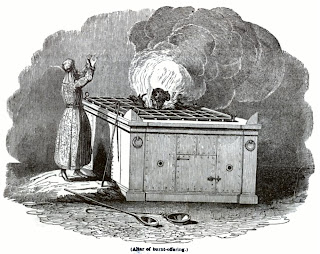 The next group of people addressed would be the whole assembly. Leviticus 4:13-21—“‘13 Now if the whole congregation of Israel sins unintentionally, and the thing is hidden from the eyes of the assembly, and they have done something against any of the commandments of the LORD in anything which should not be done, and are guilty; 14 when the sin which they have committed becomes known, then the assembly shall offer a young bull for the sin, and bring it before the tabernacle of meeting. 15 And the elders of the congregation shall lay their hands on the head of the bull before the LORD. Then the bull shall be killed before the LORD. 16 The anointed priest shall bring some of the bull's blood to the tabernacle of meeting. 17 Then the priest shall dip his finger in the blood and sprinkle it seven times before the LORD, in front of the veil. 18 And he shall put some of the blood on the horns of the altar which is before the LORD, which is in the tabernacle of meeting; and he shall pour the remaining blood at the base of the altar of burnt offering, which is at the door of the tabernacle of meeting. 19 He shall take all the fat from it and burn it on the altar. 20 And he shall do with the bull as he did with the bull as a sin offering; thus he shall do with it. So the priest shall make atonement for them, and it shall be forgiven them. 21 Then he shall carry the bull outside the camp, and burn it as he burned the first bull. It is a sin offering for the assembly.’”

Keep one thing in mind: these were not simply commands for the people while they were camped at Mt. Sinai. These would carry on for hundreds of years, into the age when they would settle in Jerusalem. And there would be times when the Law of God would be lost and forgotten. So people would not have access to the Law and would not know everything that God required and that he forbade. Now, don’t let the phrase “the whole congregation” lead you to think that this would have been a sin committed by every single person. Much like the golden calf incident, not every single Israelite worshipped that golden calf—but it was accounted as being committed by the whole congregation. Therefore, a Sin Offering had to be made for that sin. However, instead of a bull, Exodus 32 ends with God killing those responsible, and God accepted those people as a Sin Offering. Exodus 32:35—So the LORD plagued the people because of what they did with the calf which Aaron made. The method and disposal of the animal brought for a Sin Offering for the whole congregation was identical to the Sin Offering for the high priest. And since we’ve already covered that ground, I do want to share one thing before we move on.

When a Sin Offering was brought for either the high priest or for the whole congregation, the priest was not to take out the breast (brisket) and as a wave offering, nor was he to cut out the right thigh and heave it as a heave offering. Leviticus 6:30—“‘But no sin offering from which any of the blood is brought into the tabernacle of meeting, to make atonement in the holy place, shall be eaten. It shall be burned in the fire.’” For both of these, the blood was to be brought into the tabernacle. Therefore, no part of these was to be eaten. Now we can move on.

By ‘ruler’ God is referring to the head of a tribe. By ‘common people’ he is referring to simply any person in the congregation who does not act in any official capacity or hold any official position. These are the individual Sin Offerings. And as is easily seen, the procedure is quite different from the Sin Offerings for the whole congregation. First, this was to be a male goat without blemish. The bigger the sin, the bigger the sacrifice. If the high priest or the whole congregation sinned, they had to bring a bull. If the individual sinned, a goat would suffice. But, as usual, the person laid their hand on the goat to transfer their guilt to that animal that had committed no sin, to allow for that innocent animal to pay for their wickedness. You know, there is a very good answer we can give to people who say “God isn’t fair!” We should simply say, “Yes, you’re right. And I am so glad!” Was God under any kind of obligation to form a covenant with this people, whom He knew would be stubborn, backsliding, stiff-necked and rebellious? Did He have to offer them a way for innocent animals to die because they sinned? No, God isn’t fair.

So, if the head of the tribe of Zebulon committed some sin in ignorance, he was to bring a male goat without blemish; if a ‘common person’ sinned in ignorance they would bring a female goat or a female lamb. The priest slits the throat, bleeds it out, catches the blood—but he does not take it into the Tabernacle. He does not smear it on the horns of the Altar of Incense, but rather he smears it on the horns of the Altar of Burnt Offering. What’s left he pours at the base of that same altar. Then he carves out the fat in the same way prescribed in the Trespass Offerings and in the congregational Sin Offerings. However, unlike the congregational Sin Offerings, this time he does separate the breast for a wave offering, and the right thigh for a heave offering.

Now, to finish up on the subject of the Sin Offering, turn to Leviticus 6:24-27—24 Also the LORD spoke to Moses, saying, “25 Speak to Aaron and to his sons, saying, ‘This is the law of the sin offering: In the place where the burnt offering is killed, the sin offering shall be killed before the LORD. It is most holy. 26 The priest who offers it for sin shall eat it. In a holy place it shall be eaten, in the court of the tabernacle of meeting. 27 Everyone who touches its flesh must be holy.’” Notice the first part of verse 27. “‘Everyone who touches its flesh must be holy.’” What happened if someone was milling around the courtyard and saw someone’s Sin Offering and decided to grab a bite? They would probably not be around to take a second bite. Knowing how jealous Go dis for His glory, and for the people to worship Him in the way He prescribed, He would probably put that person to death right there on the spot. Because they would not be eating in a worthy manner.

Don’t think that principle came to an end with the coming of the new covenant. Listen to what Paul warns us about in 1st Corinthians 11:27-30—27 Therefore whoever eats this bread or drinks this cup of the Lord in an unworthy manner will be guilty of the body and blood of the Lord. 28 But let a man examine himself, and so let him eat of the bread and drink of the cup. 29 For he who eats and drinks in an unworthy manner eats and drinks judgment to himself, not discerning the Lord's body. 30 For this reason many are weak and sick among you, and many sleep. By taking Communion we proclaim the Lord’s death until He returns. He is our Sin Offering, and if anyone eats of that Sin Offering who is not worthy of calling themselves a Christian, God may very well “cut them off.” John Gill—

“Because of their unworthy participation of the Lord's supper, many in the Corinthian church were attended with bodily infirmities and diseases; either by way of fatherly chastisement and correction in such who were truly the Lord's people, though they had behaved unworthily; or by way of punishment to such who were not, and had sinned very grossly.”

God has not changed in 6000 years of human existence. He still jealously guards those things He calls holy. He may not punish such people in this life, but one they have gone to the grave, they will indeed reap the penalty for their transgression.

Then look how He finishes up verse 27—“‘And when its blood is sprinkled on any garment, you shall wash that on which it was sprinkled, in a holy place.’” Now, don’t think that this was a requirement for the priests to sprinkle blood on their garments. But when you have that much blood, and when you are handling it as much as they were, you're bound to get some on your garments. They didn’t wear plastic aprons, so yeah, those beautiful, hand-made garments that took so many hours to make so intricately—they would be covered in blood in no time flat. And because that blood was offered to God for sin, it was holy, and was not to be treated flippantly. You were to wash those garments within the courtyard of the tabernacle; more than likely you poured some water from the bronze laver, but you didn’t just take them down to the river and beat them on a rock. These were things that were holy to YHVH, and if you treat them like you would your everyday clothing, you could expect to receive the same treatment as anyone else who mishandled the things of God.

Now, with the individual Sin Offerings, once the priest waved the breast for a wave offering and heaved the right thigh for a heave offering, they cooked them by boiling them in either a clay pot or a bronze kettle. BUT—since what they were boiling had also been offered to the LORD, they had to do something with the water it was boiled in, as well as the vessel. Leviticus 6:28-30—“‘28 But the earthen vessel in which it is boiled shall be broken. And if it is boiled in a bronze pot, it shall be both scoured and rinsed in water. 29 All the males among the priests may eat it. It is most holy. 30 But no sin offering from which any of the blood is brought into the tabernacle of meeting, to make atonement in the holy place, shall be eaten. It shall be burned in the fire.’” Like the commands about how to treat the priestly garments, here we have a command concerning the treatment of the vessels used to cook the priests’ portion of the offerings. Again, they didn’t just take them to the river and wipe them out. They were to stay within the courtyard, and if any vessel was used that was porous, it was destroyed. If a vessel was used that was non-porous, it was scoured out and used again later. Matthew Henry—

“This intimated that the defilement was not wholly taken away by the offering, but did rather cleave to it, such was the weakness and deficiency of those sacrifices; but the blood of Christ thoroughly cleanses from all sin, and after it there needs no cleansing.”