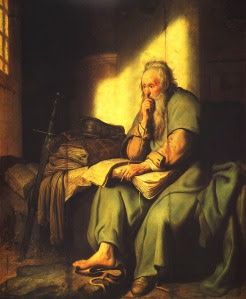 What is the refrain we always hear from the theological liberal or the Emerging guru, or Purpose-Driven™ Pied Piper who is sooooo much smarter than us knuckle-dragging fundamentalists? The same, tired, lame old, "Paul preached a different gospel than Jesus" or "Paul was setting up a religion to compete with Christianity" or--as the title of this post bears witness--"Paul never quoted Jesus!!"

Well, it just so happens that all of these arguments are wrong. Especially the last one. Now, it is true, that save for one passage (1st Corinthians 11:23-26), Paul never quote our Lord word-for-word.

That is not to say that Paul never reiterated the same principles as Christ. This concept dawned on me as I was preparing a lesson on Philippians 4:13--I can do all things through Christ, which strengthens me. I realized that Paul was simply giving us the flip-side of what Jesus said in John 15:5--"For without Me, you can do nothing." Without Christ we can do "nothing"--with Christ we can do "all things." It's two sides of the same coin.

Here is part 1 in what I hope to be a series going through Paul's letters and showing where he does indeed repeat many of the same principles that Jesus laid down. We begin with Paul's letter to the saints in Rome.

Romans 1:16--For I am not ashamed of the gospel of Christ, for it is the power of God to salvation for everyone who believes.
Luke 9:26--"For whoever is ashamed of Me and My words, of him the Son of Man will be ashamed when He comes in His own glory, and in His Father’s, and of the holy angels."

Romans 1:28-32--And even as they did not like to retain God in their knowledge, God gave them over to a debased mind, to do those things which are not fitting; being filled with all unrighteousness, sexual immorality...who, knowing the righteous judgment of God, that those who practice such things are deserving of death, not only do the same but also approve of those who practice them.
John 3:19--"And this is the condemnation, that the light has come into the world, and men loved darkness rather than light, because their deeds were evil."

Romans 2:1--Therefore you are inexcusable, O man, whoever you are who judge, for in whatever you judge another you condemn yourself; for you who judge practice the same things.
Matthew 23:3-5--"Therefore whatever they tell you to observe, that observe and do, but do not do according to their works; for they say, and do not do. For they bind heavy burdens, hard to bear, and lay them on men’s shoulders; but they themselves will not move them with one of their fingers. But all their works they do to be seen by men."

Romans 3:28--Therefore we conclude that a man is justified by faith apart from the deeds of the law.
Matthew 9:2--Some men brought to him a paralytic, lying on a mat. When Jesus saw their faith, he said to the paralytic, "Take heart, son; your sins are forgiven."

Romans 3:31--Do we then make void the law through faith? Certainly not! On the contrary, we establish the law.
Matthew 5:17-18--"Do not think that I came to destroy the Law or the Prophets. I did not come to destroy but to fulfill. For assuredly, I say to you, till heaven and earth pass away, one jot or one tittle will by no means pass from the law till all is fulfilled."

Romans 3:29-30, 4:16--Or is He the God of the Jews only? Is He not also the God of the Gentiles? Yes, of the Gentiles also, since there is one God who will justify the circumcised by faith and the uncircumcised through faith...Therefore it is of faith that it might be according to grace, so that the promise might be sure to all the seed, not only to those who are of the law, but also to those who are of the faith of Abraham, who is the father of us all.
John 10:15-16--"As the Father knows Me, even so I know the Father; and I lay down My life for the sheep. And other sheep I have which are not of this fold; them also I must bring, and they will hear My voice; and there will be one flock and one shepherd."

Romans 5:1-2--Therefore, having been justified by faith, we have peace with God through our Lord Jesus Christ, through whom also we have access by faith into this grace in which we stand, and rejoice in hope of the glory of God.
John 14:27--"Peace I leave with you, My peace I give to you; not as the world gives do I give to you. Let not your heart be troubled, neither let it be afraid."

Romans 5:8--But God demonstrates His own love toward us, in that while we were still sinners, Christ died for us.
John 3:16--"For God so loved the world that He gave His only begotten Son, that whosoever believes in Him shall not perish, but have everlasting life."

Romans 7:2-3--For the woman who has a husband is bound by the law to her husband as long as he lives. But if the husband dies, she is released from the law of her husband. So then if, while her husband lives, she marries another man, she will be called an adulteress; but if her husband dies, she is free from that law, so that she is no adulteress, though she has married another man.
Matthew 19:9--"And I say to you, whoever divorces his wife, except for sexual immorality, and marries another, commits adultery; and whoever marries her who is divorced commits adultery."

Romans 8:5--For those who live according to the flesh set their minds on the things of the flesh, but those who live according to the Spirit, the things of the Spirit.
John 4:23-24--"But the hour is coming, and now is, when the true worshipers will worship the Father in spirit and truth; for the Father is seeking such to worship Him. God is Spirit, and those who worship Him must worship in spirit and truth."

Romans 8:18-19--For I consider that the sufferings of this present time are not worthy to be compared with the glory which shall be revealed in us. For the earnest expectation of the creation eagerly waits for the revealing of the sons of God.
John 14:1-3--"Let not your heart be troubled; you believe in God, believe also in Me. In My Father’s house are many mansions; if it were not so, I would have told you. I go to prepare a place for you. And if I go and prepare a place for you, I will come again and receive you to Myself; that where I am, there you may be also."