After denying for 4 years that the Crescent of Embrace memorial to Flight 93 will contain 44 inscribed memorial panels (equaling the number of passengers, crew, AND terrorists) the Memorial Project has announced a new design that appears to collapse three of the panels into one:

Artist's depiction of the slightly altered design for the Sacred Ground Plaza.

[If you are a newcomer, the Plaza sits in the position of the star on architect Paul Murdoch's giant Islamic crescent and star flag. They call the giant crescent a broken circle now, but the unbroken part of the circle--what symbolically remains standing in the wake of 9/11--is completely unchanged. It is still a giant Islamic-shaped crescent, still pointing to Mecca.]

The focus of the Plaza is the two part Memorial Wall that follows the path of Flight 93 down to the crash site. As before, the lower section of wall contains 40 memorial panels, inscribed with the names of the 40 heroes. Instead of being small translucent panels set into the wall, they will now be 8 foot tall slabs. Nice. 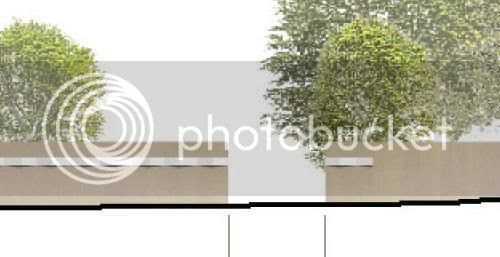 The three translucent panels inscribed with the 9/11 date were a problem because further up the flight path, at the upper crescent tip (where Flight 93 symbolically breaks the circle, turning it into the giant Islamic shaped crescent), sits one more inscribed translucent memorial panel:

At the end of the Entry Portal Walkway sits a huge glass panel that dedicates the entire site. In the original design, this brought the total number of inscribed translucent memorial panels on the flight path to 44, with the number of "extra" blocks matching the number of Islamic hijackers on Flight 93.

The enabling legislation for the Flight 93 Memorial specifically bars the Park Service from memorializing the enemy, but architect Paul Murdoch has other ideas. He doesn't just include them in some kind of can't-we-all-just-get-along multiculturalist fantasy. He depicts them as triumphant warriors, placing the capstone of his terrorist memorializing block count at the exact point where, in Murdoch's description, the terrorists' circle-breaking, crescent-creating feat is achieved. They explode through our peaceful circle, then die along with their victims. The capstone block commemorating this glorious martyrdom will be inscribed: “A field of honor forever.”

The Memorial Project is okay with all of this, but thanks to our blogbursts, too many people OUTSIDE of the Project also know about the terrorist memorializing block count, so they decided to fix up architect Paul Murdoch’s disguise, telling a caller two years ago that they were going to turn the three panels with the 9/11 date into one large panel. That would change the memorial block count from 44 to 42. Here is Mountain Goat's report on that 2007 phone call:

The gentleman did add, that the translucent blocks are actually white marble, and that the one with Sept. 11 inscribed on it will be one block, although it will be roughly the length three of the other blocks would have been.


Primping Murdoch’s disguise does not stop his terrorist-memorializing plot, but only helps him to get away with it

The Park Service assumes that the 44 blocks were a coincidence and that by eliminating the coincidence it has eliminated the problem, but the 44 blocks were not a coincidence and changing the number of blocks to 42 does nothing alter the terrorist memorializing intent. Also, because the Park Service has been trying NOT to see Murdoch is up to, they left other terrorist memorializing features of the inscribed panels completely intact.

Notice, for instance, that the separate upper section of memorial wall, inscribed with the 9/11 date, is centered on the centerline of the giant crescent:

The trail that divides the Memorial Wall into two parts is marked in purple. The section of wall with the 9/11 date is marked in aqua.

You can see just by looking that the upper section of wall is centered on the center line of the crescent. That is the exact position of the star on an Islamic crescent and star flag. Thus the 9/11 date goes to the star on the Islamic flag. The date goes to the terrorists.

Changing the number of panels used to inscribe the 9/11 date does nothing to alter this terrorist memorializing feature. Not that Murdoch really cares whether the Park Service executes his design with proper Islamic precision.


To Murdoch, it is the plan that matters

Murdoch made clear from the beginning that it is the plan that matters, not whether the memorial is actually built exactly to his specifications. We can tell that he fully expected at least one of his terrorist memorializing features to be caught and stopped because he left provision for his “mistake” to be easily corrected. This was the so called “40 Memorial Groves." There were supposed to be one for each of the 40 infidel heroes, but Murdoch's site-plan only shows 38 groves: 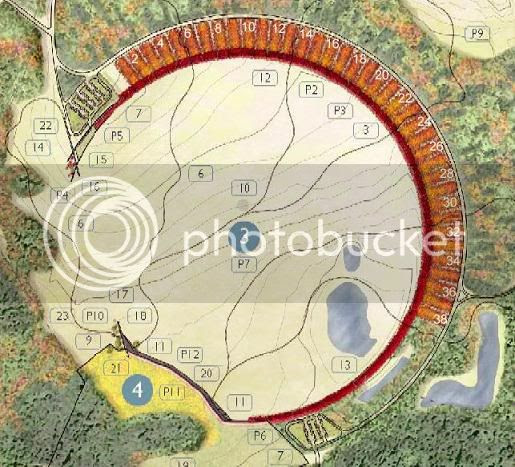 Why 38? Try to figure it out for yourself, then look here. As usual, Murdoch provides multiply redundant proof of intent, once you figure out what he is up to.

Notice that Murdoch left room for two more Memorial Groves, one at each end. But just as the 38 Groves “mistake” is easy to fix, it will also be easy to un-fix it later. Indeed, failure to follow Murdoch's exact design is not a bug. It is a feature.

Islamic fundamentalists have been citing control of the al-Aqsa mosque as a grounds for waging war against Israel since the founding of the modern Jewish state. If we fail to be true to the glorious design of Murdoch's terrorist memorial mosque, that will just be one more reason for Murdoch's co-religionists to conquer The Great Satan, so that this death-penalty insult can first be avenged ("It is not for any prophet to have captives until he hath made slaughter in the land" 8.67), then corrected.

Murdoch has not admitted to being Muslim (never mind a fundamentalist Muslim), but he HAS demonstrably designed an al Qaeda sympathizing memorial to Flight 93, all according to the established principles of proper mosque design (chapter 5), so there is no doubt of his ambition. Anyone who tries to sneak an al Qaeda memorial onto the Flight 93 crash site IS al Qaeda.

In 2005, the Park Service helped Murdoch hide his giant crescent by calling it a broken circle instead (as Murdoch had described it all along). Now the Park Service is helping to disguise yet another of Murdoch's terrorist memorializing design features, but without even acknowledging this time that the changes are in response to anything troublesome about the original design.

So tell us Park Service: if there never were 44 memorial panels on the flight path, as you have been telling the press for almost four years, why did you change the number of panels? And do you really think it is wise to help a hijacker improve his disguise?