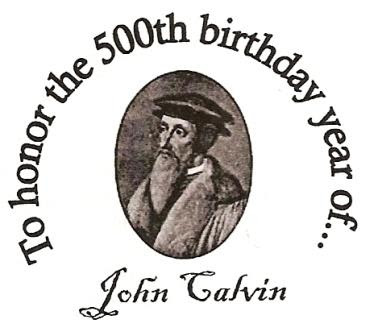 Well, he probably won't be blowing out any candles, but...

Calvin, even today has widespread influence. His commentaries and certainly his Institutes of the Christian Religion, where he laid out a comprehensive theology for the doctrines of Protestant Reformation (when many of those who believed these things were dying martyrs deaths under persecution from Rome) are still being read.

Its actually unfortunate that a man's name is associated with the doctrines that came out of the Protestant Reformation. It is not something he would have wanted. He spoke and wrote very little about himself. He wanted his readers to be pointed to Christ, not to himself. In character, he specifically asked that he would be buried in an unmarked grave, such was his aversion to public interest. He did not wish for attention to be given to him - but to his Lord and Master.