"For this reason, God gave them up to vile passions" 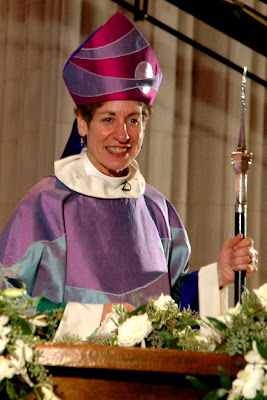 This Sunday the fellow that preaches at our little church will be headed for Africa, so I will be filling the pulpit. About the middle of last week, I started to feel drawn to a particular text in Romans. Didn't know why.

Now I know why (From Christian News Wire, via Slice of Laodicea):

In a lopsided vote, deputies to the General Convention of the Episcopal Church have effectively repealed a moratorium on the consecration of further gay bishops.

Following initial votes in the church's House of Deputies on Sunday and House of Bishops on Monday, the House of Deputies gave final passage with 72 percent of the vote to an amended version of resolution D025 on Tuesday afternoon. The resolution affirms "that God has called and may call such individuals, to any ordained ministry in The Episcopal Church."

The newly-adopted resolution essentially counters another resolution passed three years ago, in which dioceses were urged to "exercise restraint" in the consecration of practicing homosexuals as bishops. The effect of that resolution was to tenuously keep the Episcopal Church connected to the broader Anglican Communion for the intervening three years.

The Anglican Communion is divided over hot button issues like homosexuality and scriptural authority, with U.S. Episcopal church leaders being more theologically and politically liberal than their overseas counterparts. IRD supports a conservative perspective that affirms traditional church teachings.

Romans 1:26-27, 32--For this reason God gave them up to vile passions. For even their women exchanged the natural use for what is against nature. Likewise also the men, leaving the natural use of the woman, burned in their lust for one another, men with men committing what is shameful, and receiving in themselves the penalty of their error which was due. And even as they did not like to retain God in their knowledge, God gave them over to a debased mind, to do those things which are not fitting...knowing the righteous judgment of God, that those who practice such things are deserving of death, not only do the same but also approve of those who practice them.
Posted by Unknown at 7/15/2009 01:22:00 PM