Todd Bentley exposed as a fraud 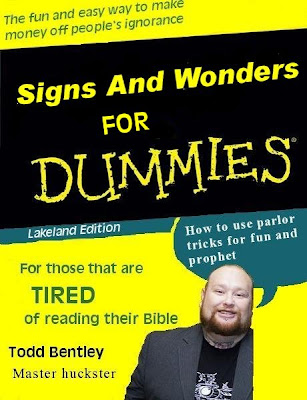 Unfortunately, I don't have a category here called "News of the Obvious." Because if I did, this would be at the top of the list. As if we needed any further proof that Todd Bentley was a liar, conniver, charlatan, false prophet, etc--in addition to the kicking, kneeing, motorcycle boots to the face, and all the other shenanigans that with the Bentley Brothers and Joyner and Branham Flying Circus™, here is a story about the list of those whom Todd Bentley Ministries claimed were MIRACULOUSLY HEALED!!

However, there's a problem with some of those who were supposedly "healed."

What's the problem, you ask?

I kid you not. From World Magazine (via A Little Leaven) [emphases mine]:

[W]hen [Christopher] Fogle got severe cancer, his relaxing fishing trips, which he sometimes took with his children, ended. It was a devastating blow for the active 45-year-old. But for Todd Bentley, television preacher and self-proclaimed healer, the cancer represented an opportunity to "proclaim the glory of God." [Or was it more to proclaim "The glory of Todd"?--Ed.] At the height of what many called a revival, WORLD asked Bentley to talk about the healings, like Fogle's, and asked for a list of people who had been healed at the services. His associates told me Bentley was out of the country and a list could not be produced. But six weeks and more than a dozen requests later, the ministry eventually sent a list of 13 names. Fogle was No. 12 on the list, along with this note: "Healed through the Outpouring and is back to fishing."

That was on Aug. 8, 2008. There was just one problem. Two weeks earlier, on July 22, Christopher A. Fogle—according to his obituary in the Keokuk (Iowa) Daily Gate City, "left this life . . . after a courageous battle with cancer."

Oops. But the fraud doesn't end there. Read on [emphases mine]:

A review of the list nearly one year later reveals that Fogle is not the only person "healed" who is now dead. When I called Phyllis Mills, of Trinity, N.C., on April 22, to hear the testimony of her healing, a polite family member said, "Phyllis passed away a few days ago. In fact, we're on our way to her funeral now."

Any more? Yep [emphases mine]:

Another problem with Bentley's list is that some of the healings, even if legitimate, didn't happen at Bentley's services. Gaila Smith, 53, of Yerington, Nev., was diagnosed with breast cancer 10 years ago, at age 43, and had what she called a "total mastectomy" at that time. But the cancer had spread to her liver. Over the next decade she endured more rounds of chemotherapy, the latest one ending in December. She eventually attended a women's conference, where "God touched me," she said. She says she was healed at the women's conference, but when she attended Bentley's meetings in Lakeland, they asked, "If you had experienced a miraculous healing, come forward."Smith went forward and told her story, and she ended up on Bentley's list, with this note: "Healed of breast cancer that had spread to liver. Totally healed in Florida, all scans are now clear."

Not only did any healing take place elsewhere, Smith now admits that the scans are not now clear. "The doctors tell me that my numbers are going up," said Smith, who told me that she, too, had a healing ministry. "But we don't buy into that. That's a fact, but it's not the truth. The truth is that I've been healed."

It's a fact, but it's not the truth. So if I say my bald head "is a fact but not the truth," does that mean I have hair up there? But, he does have his supporters [emphases mine]:

"We don't regret our time there at all. We saw many miracle signs and wonders. The Lord knew what was going to happen, but he chose Todd anyway. And there are still fires burning all over the world. How can you argue with that?"

Still fires burning all over the world. Hmmm, I was starting to wonder why I keep smelling sulfur.

And the downward spiral that is Todd Bentley continues. All that "counseling" he was going through because he is such a "man of God?" Man of God, huh? What kind of "man of God" does this sound like [emphases mine]:

In November, the Fresh Fire board said that Bentley was "not submitting" to the counseling and restoration process and that he was guilty of adultery.....On March 9, 2009, [it was] announced that Todd had remarried—to the same "former employee" with whom he had had the inappropriate relationship.

In clear violation of the word of God that he was supposed to be so dedicated to. Except, he was NOT committed to the word of God. He was too busy being led around blindly by "angels." Of course, those weren't God's angels who were leading him through darkness. If only Fresh Fire had shown that kind of sense before this circus got out of hand. But, hey, since he's going to be restored to the charismatic circus, why not learn from the worst [emphases mine]: