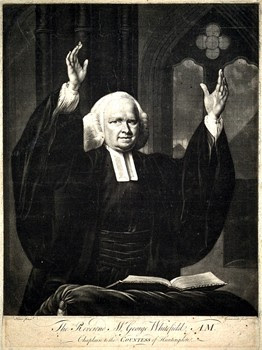 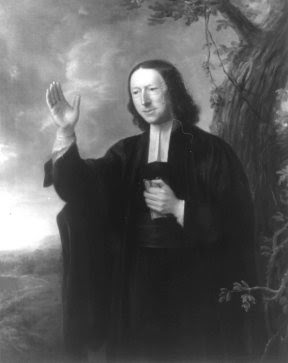 (Left: George Whitefield; Right: John Wesley. Two men who differed greatly concerning election, yet for all their differences, accorded the other as being very devout and godly men. Should we disagree, may we be as charitable.)

Sunday morning, in a group prayer before worship service, one of the fellows in the group quoted 2nd Peter 3:9 in the usual manner we hear so many people (mis)use it so often. Now, keep in mind, I dearly love this brother and I am not going to call someone a heretic just because they think this verse means that God wants every single person to be saved. But this IS the word of God we are talking about, and we do need to understand what God is saying, and what He is NOT saying. With that in mind, and with humble submission to His word, let us delve into this passage. And to do so, to keep it in context, we actually have to go back to verse 1, and begin there. That said, here is the passage in its entirety. 2nd Peter 3:1-9--

1 Beloved, I now write to you this second epistle (in both of which I stir up your pure minds by way of reminder), 2 that you may be mindful of the words which were spoken before by the holy prophets, and of the commandment of us, the apostles of the Lord and Savior, 3 knowing this first: that scoffers will come in the last days, walking according to their own lusts, 4 and saying, "Where is the promise of His coming? For since the fathers fell asleep, all things continue as they were from the beginning of creation." 5 For this they willfully forget: that by the word of God the heavens were of old, and the earth standing out of water and in the water, 6 by which the world that then existed perished, being flooded with water. 7 But the heavens and the earth which are now preserved by the same word, are reserved for fire until the day of judgment and perdition of ungodly men. 8 But, beloved, do not forget this one thing, that with the Lord one day is as a thousand years, and a thousand years as one day. 9 The Lord is not slack concerning His promise, as some count slackness, but is longsuffering toward us, not willing that any should perish but that all should come to repentance.

When studying any passage of Scripture, certain things need to be considered:So, let's take these one at a time.

To answer this question we can look immediately at 2nd Peter 3:1, and we can also go back to 1st Peter 1:1-2 as well as 2nd Peter 1:1.
1st Peter 1:1-2--Peter, an apostle of Jesus Christ, to the pilgrims of the Dispersion in Pontus, Galatia, Cappadocia, Asia, and Bithynia, elect according to the foreknowledge of God the Father, in sanctification of the Spirit, for obedience and sprinkling of the blood of Jesus Christ.
2nd Peter 1:1--Simon Peter, a bondservant and apostle of Jesus Christ, to those who have obtained like precious faith with us by the righteousness of our God and Savior Jesus Christ.
2nd Peter 3:1--Beloved, I now write to you this second epistle...

So, this letter was written to the same people who received his first letter. These are, of course, believers--saints, holy ones, the saved, the brethren, the elect.

It was written for two reasons:

3) What idea was the author trying to convey?

Peter's message in this epistle is simple: Just because Christ has not returned yet does not mean He isn't going to. In 2nd Peter 3:2-3, he encourages the reader to be mindful of the words which were spoken before by the holy prophets...knowing that scoffers will come in the last days. He is exhorting them to remain faithful to the One who is always Faithful, and to wait for His appearance with patience, and to be found without spot and blameless, and consider that the longsuffering of our Lord is salvation (2nd Peter 3:14-15).

So, what does this all mean for 2nd Peter 3:9? Does this mean that the way the Arminian views this verse is not correct? Or does this verse teach that God desires all men to be saved? (After all, isn't that what we read in 1st Tinothy 2:4? Well, more on that verse another time). To answer these two questions: this verse DOES NOT TEACH that God wants ALL PEOPLE to be saved.

So...Which brings us to 2nd Peter 3:9. The Lord is not slack concerning His promise. Here we have what I call a "throwaway phrase." It's one of those phrases that many people just kinda skim over, they repeat it because it's there--but otherwise, they usually chop it out. Can we do that with ANY Scripture? God forbid! If the Holy Spirit spoke it, um, do you think there might be a REASON? Absolutely!

The Lord is not slack. Why does he say that? To stir the people up to patience, to remind them that if God promises something, He will do it (cf. Philippians 1:6), to keep them grounded in their faith to God.

The Lord is not slack concerning His promise. STOP! LOOK AT THE WORD 'PROMISE.' Is this singular, or plural? Singular! I will be forever indebted to A. W. Pink for pointing this out (in The Soverignty of God). The word 'promise' is singular, as in 'promise,' not 'promises.' So, what is the promise he is speaking of? The promise of Christ's return. God is not tardy concerning the return of our Lord.

The Lord is not slack concerning His promise as some count slackness. These false teachers were going to come along and say, "See, Jesus hasn't returned yet! Didn't He say He was coming again 'Soon'?" But that is man's reckoning. God does things in His own timing. Which is why Peter wrote in the preceding verse that with the Lord one day is as a thousand years, and a thousand years as one day. (We won't go into how Theistic Evolutionist types jerk this verse out as some kind of 'proof-text'). If God tarries 10,000 years--is that not 'soon' for Him? He is eternal, what's a few years?

Which brings us to where Peter says that God is not willing that any should perish but that all should come to repentance. Two questions to ponder:I do hope this has helped to shed some much-needed light on a passage that is so misunderstood by many well-intentioned people (and by some not-so-well-intentioned). We must never discount ANY words of Scripture, for they are given for our edification and that we may grow in grace and knowledge.