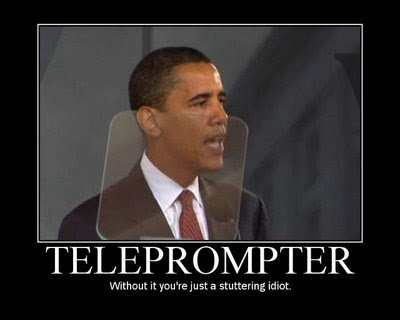 Not sure which is more telling. The fact that Barack O'Telepromter is ashamed to have people see the name of Christ. Or that the Roman Catholic goatherders at Georgetown University acquiesced to his wishes. From FOXNews:

Georgetown University hid a religious inscription representing the name of Jesus during President Obama's address there Tuesday, FOXNews.com has confirmed, because White House staff asked the school to cover up all religious symbols and signs while the president was on stage.

The monogram IHS, whose letters spell out the name of Jesus, and which normally perches above the stage in Gaston Hall where the president spoke, was covered over with what appeared to be black wood during the address.

"In coordinating the logistical arrangements for the event, Georgetown honored the White House staff's request to cover all of the Georgetown University signage and symbols behind the Gaston Hall stage," university spokesman Andy Pino told FOXNews.com.

One correction to this story: The letters "IHS" do not spell out the name of Christ. They stand for the Latin phrase, "In hoc signum vinces" which means "In this sign--conquer!"

So here is the Telepromter of the United States, a man who is angered by ANYONE who DARES question the fact he is a Christian, showing the world that he is indeed ashamed of the Lord Jesus Christ. Didn't he trot out George Snuffalupagus to be his little lap dog to do a softball interview in which O'Telepromter sternly defended his Muslim faith his Christian faith? Didn't all the news outlets that anointed him our Messiah go to great lengths to show us a man who loved Jesus? Who attended church regularly?

Oh, and here's another little nugget. During this speech, O'Teleprompter had this to say:

Now, there's a parable at the end of the Sermon on the Mount that tells the story of two men. The first built his house on a pile of sand, and it was soon destroyed when a storm hit. But the second is known as the wise man, for when "the rain descended, and the floods came, and the winds blew, and beat upon that house, it fell not: for it was founded upon a rock."

It was founded upon a rock. We cannot rebuild this economy on the same pile of sand. We must build our house upon a rock. We must lay a new foundation for growth and prosperity -- a foundation that will move us from an era of borrow and spend to one where we save and invest; where we consume less at home and send more exports abroad.

Uh, Barry. Ya might want to dust off your Bible before you start quoting it. Number one, this passage IS NOT ABOUT MONEY! It's actually about something you have not shown you can do: hear the words of Christ and LIVE BY THEM. That includes that little command about "Whoever obeys my commands loves Me." The first command: Love the LORD your God with all your heart, soul, and mind. And since you are ashamed of the name of Christ, you have shown that you cannot obey that command, so you have just shown yourself to be the man who builds his house on sand. And how great your fall shall be!

Second, Barry, you got the order of the houses backward. The FIRST man built his house upon rock, the SECOND built his house upon sand. Yeah, dig that Bible out from under your Qu'ran and crack it open once in a while and you might actually know what you're talking about.

And there stands the Whore of Babylon the Harlot on 7 Hills the Roman Catholic church bowing down and kissing his feet and showing the world that they are indeed apostate and desire the praise of men more than the praise of God. Although this shouldn't be surprising, seeing as how they consider Muslims to be their brothers. "The plan of salvation also includes those who acknowledge the Creator, in the first place amongst whom are the Muslims; these profess to hold the faith of Abraham, and together with us they adore the one, merciful God, mankind's judge on the last day" (Paragraph 841 of the Catechism of the Catholic Church).
Posted by Unknown at 4/17/2009 01:31:00 PM