In April 2006, Park Service Director Mary Bomar ordered an internal investigation into claims that the planned Flight 93 Memorial is actually a terrorist memorial mosque, built around a giant Mecca-oriented crescent. Bomar's investigation was a total fraud, concluding, for instance, that it isn't possible to calculate the orientation of the crescent because the site-plan has not been geo-referenced. (Page 2, PP2 of September 2006 summary report.) Page 1 site-plan was drawn on a topo map that the Memorial Project provided to all participants in the design competition. A topo map is the epitome of a geo-referenced map. North marked on a topo map is true north, which is the only piece of information needed to calculate the orientation of the crescent. Just connect the tips of the crescent, form the perpendicular bisector, and calculate how many degrees it points from north (53.4). 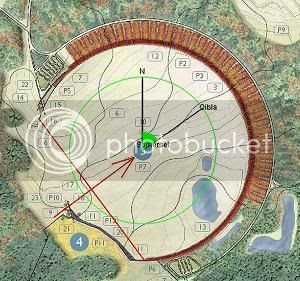 Somerset PA is ten miles from the crash-site. The "qibla" is the direction to Mecca. Red lines show the orientation of the crescent. The crescent points 1.8° north of Mecca. (Click for larger image.)


A request for oversight

Because it is the director's office that has been covering up the Mecca-orientation of the crescent, oversight can only come from Interior Secretary Dirk Kempthorne himself. Several people sent letters to Secretary Kempthorne two weeks ago, showing how the giant Mecca-oriented crescent remains completely intact in the so called redesign. But Mr. Kempthorne also needs to know that he is getting bad information from his subordinates in the Park Service. Thus a request for all readers of this post: if you have a minute, please copy and paste this entire post into an email for Secretary Kempthorne.

We don't need for the secretary to understand all the terrorist memorializing features in the design, or the numerous proofs of intent that architect Paul Murdoch included so that his accomplishment will be undeniable once it is a fait accompli. It is enough that he be concerned about features that can be readily interpreted as terrorist memorializing, whether they are intended or not. As Congressman Tancredo put it: we need "a new design that will not make the memorial a flashpoint for this kind of controversy and criticism."

But even getting to the most basic facts about what is in the present design requires getting past Mary Bomar's fraudulent report, which tries to pretend that there is nothing that can even be interpreted as untoward.

In addition to claiming that topo maps are not geo referenced, Mary Bomar's internal investigation cites a small number of academic experts, all of whom spout nothing but the most absurd non sequiturs. One is Dr. Daniel Griffith, professor of "geo-spatial information" at the University of Texas. About Alec Rawls' analysis of the Mecca orientation of the giant crescent, Dr. Griffith writes:

... Mr. Rawls's arithmetic calculations appear to be correct ... [but] ... just because calculations are correct does not make the resulting numbers meaningful.

Dr. Griffith's point, it seems, is that the mere fact of Mecca orientation does not imply intent. Who said it did? The way Murdoch proves intent is by repeating his Mecca orientations (scroll down to the last section here). But intent is not the only thing that matters. Even without terrorist memorializing intent, it is inappropriate to plant a giant Mecca oriented crescent on the crash site.

The Memorial Project knows this, but it is committed to defending the crescent design, so it keeps using its doubts about intent as an excuse for denying the facts. Dr. Griffith, for instance, is telling every reporter who will listen that there is no such thing as the direction to Mecca. "Anything can point toward Mecca," he told the Pittsburgh Post Gazette, "because the earth is round." One billion Muslims face Mecca five times a day to pray, and Griffith pretends there is no such thing as facing Mecca!

Of course he knows better. The first thing that Griffith's report does is calculate the direction to Mecca:

I computed an azimuth value from the Flight 93 crater site to Mecca of roughly 55.20°.

Dr. Kevin Jaques, specialist in Islamic sharia law from the University of Indiana, acknowledges that the Mecca-oriented crescent is similar to the mihrab around which every mosque is built, but says:

...just because something is 'similar to' something else does not make it the 'same'.

Like Daniel Griffith, Mr. Jaques is trying to make hay of the fact that Mecca orientation does not by itself imply intent. So what? Intentional or not, it is unacceptable for the central feature of the Flight 93 memorial to be a geometric match for the central feature of a mosque. Jaques is pretending that the questions he raises about intent somehow make the facts irrelevant.

Professor Jaques also dismisses the likeness between the Mecca-oriented crescent and a traditional Islamic mihrab by noting that lots of religious structures have prayer-direction indicators, not just mosques:

The biggest hole in [Rawls'] argument is that all of the elements he points to are common architectural features that one would find in a church or synagogue. The mihrab originated in pre-Islamic buildings and can be found in temples, churches, and synagogues around the Mediterranean.

This is logic? Because Christian churches are often oriented to the east, that somehow makes it okay to build the Flight 93 memorial around a half-mile wide Mecca oriented crescent? If this is "the biggest hole in [Rawls'] argument," then there are no holes in Rawls' argument.


Project spokesmen know the truth, and are lying about it

Memorial Project spokesmen have followed the lead of these academic frauds, using doubts about intent as a pretext for denying the facts. Asked about Rawls' Mecca orientation claim, Patrick White, vice president of Families of Flight 93, denied it:

Rawls' claims are untrue and "preposterous," according to Patrick White, Families of Flight 93 vice president. "We went through in detail all his original claims and came away with nothing."

Joanne Hanley has done the same:

"Alec Rawls bases all of his conclusions on faulty assumptions," said Joanne Hanley, the superintendent of the Flight 93 National Memorial. "In addition, the facts are twisted and people are misquoted, all to serve his intended purpose."

But she too has admitted the Mecca-orientation of the giant crescent, telling Mr. Rawls in a 2006 conference call that she wasn't concerned about the almost-exact Mecca orientation of the crescent because: "It isn't exact. That's one we talked about. It has to be exact." (Crescent of Betrayal, download 3, page 145.)

These are your subordinates Mr. Kempthorne. Please do not let them get away with this fraud. Congressman Tancredo is demanding answers from Director Bomar and many of us are hoping that you will do the same. There is not much time. Construction on Paul Murdoch's terrorist memorial mosque is about to begin.
Posted by Unknown at 11/28/2007 08:35:00 AM