Because it's who he was! 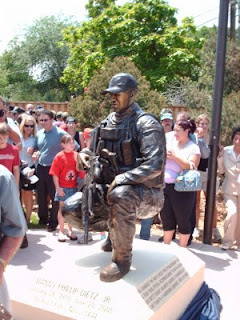 Because he went into a hostile environment--willingly--and put his life on the line to get rid of people who want to kill us. Because he didn't want the violence happening over there to come over here. Because being a soldier was what he was. That's why the statue of Danny Dietz shows him holding his rifle. Blackfive has more:

A group of Littleton parents is opposing the design and location of a memorial to a fallen local Navy SEAL, Danny Dietz, who died in combat in Afghanistan two years ago.

They say the statue, depicting Dietz clutching an automatic rifle, glorifies violence. In Berry Park, it would be within blocks of three schools and two playgrounds.

"I don't think young children should be exposed to that in that way - unsupervised by their parents or any adults," said Emily Cassidy, one of the mothers.
[...]
Dietz's father said the family is devastated by the uproar.

"It broke our hearts," said Dan Dietz, who still lives in the area. "My son was fighting for her freedom to do exactly what she is doing. She put my son in the same category as Columbine. How does she have the audacity to do that?"...

Why can't some people get it? Why do some people seem to think that war isn't a nasty business? Of course it is, but sometimes, it's gotta be done. We don't like it, we wish it wasn't so, but it is. And for the people of Littleton to get like this about a statue depicting a man going about his business of protecting us and our country is a bit ticky-tacky.

I can understand there concerns after what happened at Columbine. But that was a COMPLETELY different thing. We ain't talking apples and oranges here, we're talking apples and habeñero peppers.
Posted by Unknown at 7/06/2007 04:10:00 PM